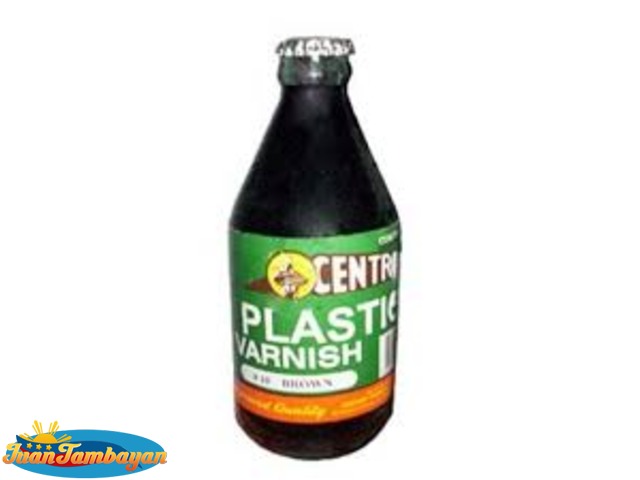 Varnish is a transparent, hard, protective finish or film primarily used in wood finishing but also for other materials. Varnish is traditionally a combination of a drying oil, a resin, and a thinner or solvent. Varnish finishes are usually glossy but may be designed to produce satin or semi-gloss sheens by the addition of "flatting" agents. Varnish has little or no color, is transparent, and has no added pigment, as opposed to paints or wood stains, which contain pigment and generally range from opaque to translucent. Varnishes are also applied over wood stains as a final step to achieve a film for gloss and protection. Some products are marketed as a combined stain and varnish.

After being applied, the film-forming substances in varnishes either harden directly, as soon as the solvent has fully evaporated, or harden after evaporation of the solvent through certain curing processes, primarily chemical reaction between oils and oxygen from the air (autoxidation) and chemical reactions between components of the varnish. Resin varnishes "dry" by evaporation of the solvent and harden almost immediately upon drying. Acrylic and waterborne varnishes "dry" upon evaporation of the water but experience an extended curing period. Oil, polyurethane, and epoxy varnishes remain liquid even after evaporation of the solvent but quickly begin to cure, undergoing successive stages from liquid or syrupy, to tacky or sticky, to dry gummy, to "dry to the touch", to hard. Environmental factors such as heat and humidity play a very large role in the drying and curing times of varnishes. In classic varnish the cure rate depends on the type of oil used and, to some extent, on the ratio of oil to resin. The drying and curing time of all varnishes may be sped up by exposure to an energy source such as sunlight, ultraviolet light, or heat. Many varnishes rely on organic oils or resins for their binder in combination with organic solvents; these are highly flammable in their liquid state. In addition, all drying oils, certain alkyds, and many single-component polyurethanes produce heat during the curing process. Therefore, oil-soaked rags and paper can smolder and ignite hours after use if they are bunched or piled together, or, for example, placed in a container where the heat cannot dissipate.